If you are looking for a cheap and power saving home server then a used thin client like a Dell Wyse or a Fujitsu Futro might fit your bill.

After my experiments with the ODROID-M1 I was talking to some people in my network about the difficulty to get hands on a Raspberry Pi at the moment and about my experience with the ODROID-M1. One of them mentioned the option to buy an old used thin client like a Dell Wyse or a Fujitsu Futro and that this might even be cheaper than a new Raspberry Pi 4. I started to look around and watch some YouTube videos about it and finally decided to give it a try. Below you will find my experience report. 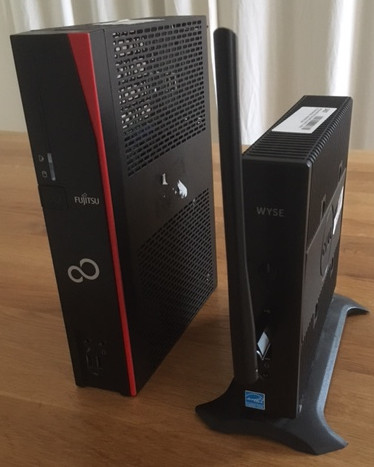 I am really not a hardware person. Please keep that in mind when you read the below. I made several mistakes in buying things that I did not need and will also talk about those mistakes. I hope that my story will help others in the future.

After my successes with the Dell Wyse I got more adventurous and decided to buy a Fujitsu Futro, too. I simply used the 4 GB of Ram that were originally in the Dell Wyse and added them to the Fujitsu Futro to have 8GB of Ram in it, too. For the hard disk you can use an mSATA SSD, which comes already in the right format to plug into the main board out of the box, e.g. you don’t have to destroy a plastic case or anything for that. I picked a smaller SSD though, because I don’t plan to use it for data intensive applications.

Above I summarized the min and max costs, where the minimum is the Futro plus the 256 GB SSD, because you can operate it very well with only 4 GB of RAM and a cable network connection, too. The maximum is the Wyse with the 8 GB of memory, the 1 TB SSD disk and the WLAN adapter. Even the maximum cost is less then what I paid for my ODROID-M1 (209.44 €).

In the video Raspberry Alternative? Hier kommt ein Dell Wyse 5010 - Dx0d the author talks about the option to plug in a network card into the main board. That comment led me quite a bit off-road:

And even my final choice of the TP-Link Archer USB WLAN adapter is far from being ideal. In retrospect I found out that it is not automatically detected by the Ubuntu LTS 22.04 kernel. You have to follow the instructions Proper way of installing wifi drivers (rtl8822bu), which means checking out code from github and building the kernel module via DKMS. This is quite straight forward, but I was expecting a more “out-of-the-box” experience with a USB adapter. You might want to look for another USB adapter that is supported by the Linux kernel out-of-the-box.

2022-10-16 Addendum: a friend pointed me towards Bingfu M.2 WiFi Antenna, which should have been able to solve my internal wifi card problem. But that is for another time.

Here are the results of the byte-unixbench and the measures idle power consumption.

The Dell Wyse 5060 CPU is a AMD GX-424CC with 4 CPU cores. It has a higher single core and then of course also a higher multi core benchmark result than the Fujitsu Futro S920. Also subjectively, when I worked on the Dell Wyse 5060 via mouse and keyboard and GUI it felt much more fluent than working on the Futro S920.

The Futro S920 CPU is a AMD GX-222GC with 2 CPU cores. Single core it seems to be on-par with the ODROID M1. The ODROID M1 has 4 cores, though. Sadly the UnixBench 5.1.3 fails to deliver a result for the ODROID M1 in the multi core scenario.

As another comparison I added the netcup VPS, which is also a 2 CPU core system. It has the highest single core benchmark result, but in the multi core scenario the Dell Wyse 5060 wins.

For the cost comparison I assumed 8 GB of Ram plus a 256 GB SSD disk. I did not include the WLAN adapter and also subtracted the cost of the WLAN adapter for the ODROID M1. The netcup VPS has less disk space (40 GB), though. As the cost for the netcup I assumed 5 years of runtime.

For the total cost of ownership (TCO) calculation I added the power costs at 0.30 €/kWh for the idle power consumption for 5 years.

All in all I would say that if you don’t need a local system then the netcup VPS at 2.99€/month might be the best option with the least hassle.

If you need a local system to run Home Assistant or something similar in your local environment then I’d say that the Dell Wyse 5060 might be the best option. You get a quite powerful system with a low idle power consumption for a low price.

Just as a side remark, it might be another reason to prefer the x86 based thin client systems over the arm64 systems like the ODROID M1 or the Raspberry Pi 4, because some docker images will only exist for the x86 based systems (e.g. the timescale-ha multiarch support is missing).