Causality, State Based vs. Operation Based Representation

Judea Pearls Causality and the do()-calculus in a state-based and an operation-based picture.

I am struggling since quite some time with Judea Pearl’s causality theory and his do-calculus. His work is summarized in the following three books (in order of publishing and in decreasing order of difficulty):

The preceding sub-title and the following quote are Leslie Lamport’s words:

This blog post develops in parallel to my thinking, e.g. don’t take it as the final word …

Operation Based vs. State Based representations

In state-based representation you only track the state of an object (or the world), e.g. is-the-light-switch-on-p (this is lisp notation where the -p at the end indicates a predicate) with values yes/no.

Both representations are equivalent and the above mentioned paper shows how to convert from the one to the other.

Causality Representation vs. my Intuition

My intuition of causality works in the operation based picture. You start out with a world state W​0​​, you apply an action A to it and you end up with a new world state W​1​​.

There is also an implicit happened-before order (e.g. time) in the sequence of actions (at least locally, e.g. when you look at an object like the light switch).

The representation of Markov-Decision-Processes (MDPs) would match my intuition quite well: 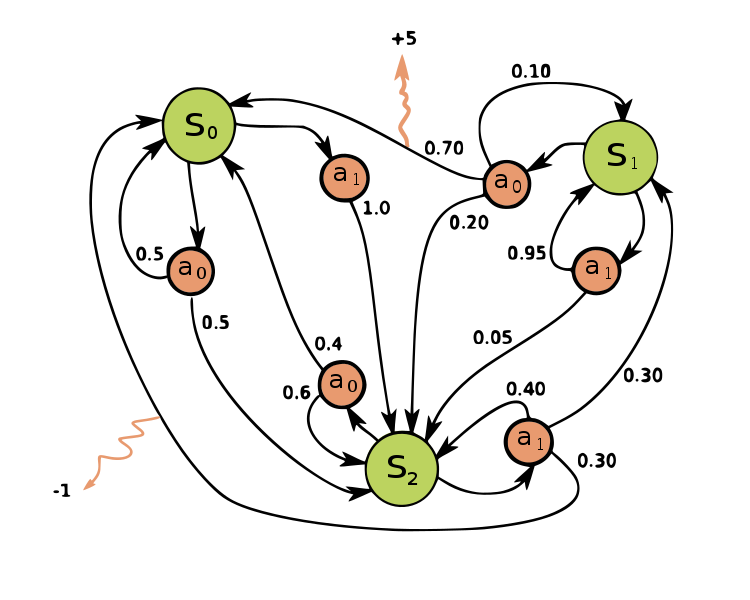 You hav states (green) and actions (redish/orange). If you apply an action to a state then you have some transition probabilities to other states. The rewards part of MDPs is irrelevant for our analysis of causality here.

But the do-calculus of Judea Pearl works “on tables” (each column represents the instantiations of a random variable) like in statistics, e.g. it is completely state-based.

One typical example is the Rain-Sprinkler-GrassWet example:

You have three variables as three columns, one column RAIN, one column SPRINKLER and one column GRASS_WET. This representation lacks actions (like “turn the sprinkler on”) and time.

In such simple examples like Rain-Sprinkler-GrassWet or LightSwitch-Light or Voltage-Current (like in Ohm’s law) this is fine. But for more difficult examples it constantly confuses me.

Imagine the example of someone throwing a projectile (stone, foot-ball, snow-ball, cotton-ball) and maybe hitting a window that then perhaps breaks. In order to work with this example it would not be sufficient to have a column projectile with some value in it. You would need to store the whole trajectory in the “column” projectile and then assign to each trajectory a probability for the window breaking.

I cannot tell exaclty why, but for my intuition it would also make a difference if the projectile would be a stone or a snow-ball. In the case of a stone: if somebody threw the stone three weeks ago and the window broke you could at least forensically reconstruct the happenings by finding the projectile inside the room the window is part of. But in the case of a snow-ball the window would break and three weeks later the snow-ball is molten and the water is evaporated, e.g. there is no trace left of the object that caused the window to break. This is not relevant for forward causality (from cause to effect), but it feels important for the backward reasoning from effect to most probable cause, especially if you have “missing variables” (like the snow-ball is missing).

I am not sure if this will remain my final answer, but for the moment I’ve settled for predicates like in logic. In the window example you would introduce a column projectile-did-hit-the-window-in-the-past-p or similar. Once you have converted the operation-based scenario into a (kind-of) state-based picture you can apply the do-calculus.

I still would hope for another representation more like Markov-Decision-Processes.